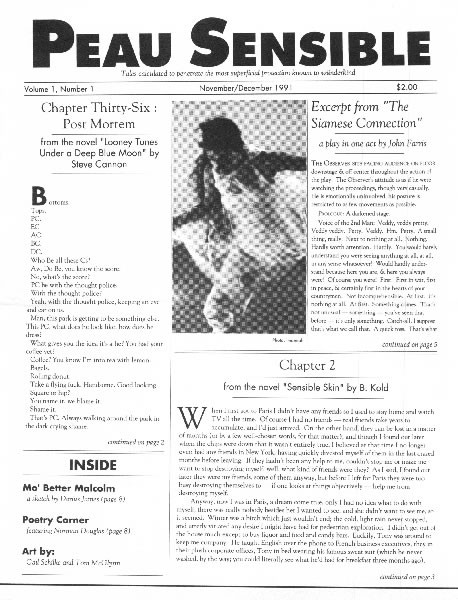 Late 1991, Norman Douglas, B. Kold, John Farris (The Ass’s Tale) and Darius James (Negrophobia, That’s Blaxploitation) were sitting around Steve Cannon’s (Groove, Bang, and Jive Around) house on East 3rd Street, lamenting the lack of both a literary scene in New York and literary magazines worth reading. They realized they had a little printing press – a Mac SE – so they decided to make their own. Everybody donated a story, then they got some art from Tom McGlynn, Constance Williams (who took the cover photograph of dancer/future editor Patricia Winter) and Gail Schilke, and found a printer in Chinatown who didn’t speak English so wouldn’t object to the content (and was cheap). A few hundred copies of this 8-page issue, Peau Sensible 1, rolled out just a few weeks later.

The way Steve tells it, he started A Gathering of the Tribes magazine first, but we believe we beat him by a few months, and in fact, he was inspired by us – if a bunch of fuck-ups like us could do it, why couldn’t he?