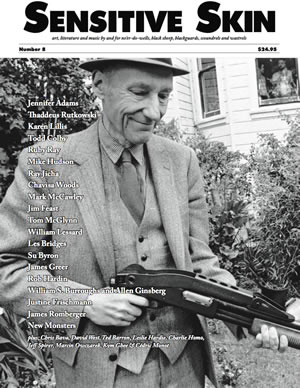 A rare interview with William S. Burroughs, by Allen Ginsberg, from the early 90s, with previously-unpublished photos of Burroughs by Ruby Ray

Speaking of Ruby Ray, she’s our featured photographer of this issue. A co-founder of ReSEARCH magazine, we’re proud to present Ruby’s amazing photos from the original SF punk scene, including shots of Flipper, The Dead Kennedys, Exene Cervenka and Sid Vicious;

Mike Hudson, founder and lead singer of seminal seventies punk rock band The Pagans, has spent the past 35 years working for different magazines and newspapers, writing mostly journalism, criticism and essays but a small stream of fiction as well. He recently published Never Trust the World, his fifth book.

James Greer, author of the novels Artificial Light (LHotB/Akashic 2006) and The Failure (Akashic 2010), and the non-fiction book Guided By Voices: A Brief History, a biography of a band for which he played bass guitar.

Thaddeus Rutkowski, the author of the innovative novels Haywire, Tetched and Roughhouse.

Karen Lillis (aka Karen the Small Press Librarian), author of Watch the Doors as They Close (Spuyten Duyvil, February 2012).

Chavisa Woods, whose debut collection of short stories, Love Does Not Make Me Gentle or Kind (Fly By Night Press, 2009) was a Lambda Literary Award finalist for Debut Fiction. Woods recently completed The Albino Album, a novel, which is set to be released by Seven Stories Press in the Spring of 2013.

Jim Feast, the author (with Ron Kolm) of the novel Neo Phobe, and is a founding member of the Unbearables writers group

Rob Hardin, author of Distorture, winner of the Firecracker Award.

Tom McGlynn, an artist, writer, and independent curator based in the NYC area. His work is represented in many national and international collections including the permanent collections of the Whitney Museum, The Museum of Modern Art, and The Cooper- Hewitt National Design Museum of the Smithsonian.

A two-page original comic strip from James Romberger, whose drawings of the ravaged landscape of the Lower East Side are in many public and private collections, including the Metropolitan Museum of Art and Brooklyn Museums. His efforts for commercial comics publishers include work for Marvel Comics’s Epic Illustrated, Image Comics’ NYC Mech, and the critically acclaimed Seven Miles A Second, Romberger and Marguerite Van Cook’s graphic novel done in collaboration with artist, writer, and AIDS activist David Wojnarowicz.