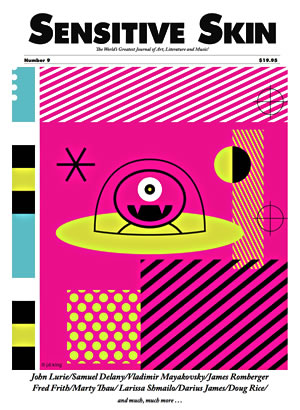 An exclusive interview with, and music by, seminal guitarist Fred Frith (Henry Cow).

A portfolio of paintings from actor (Stranger Than Paradise) and musician (Lounge Lizards) John Lurie.

A memoir by Marty Thau, former manager of Suicide and The New York Dolls

A new translation of poetry by Vladimir Mayakovsky from Jenny Wade.

Photographs of the seamy side of Tijuana by Chris Bava.

An interview with Darius James conducted by Ghazi Barakat, about his new documentary, The United States of Hoodoo.

Sensitive Skin, an anthology of post-beat, pre-apocalyptic art, writing, music and whatnot, features work by both world-famous and new-and-emerging artists, writers, and musicians from around the globe.