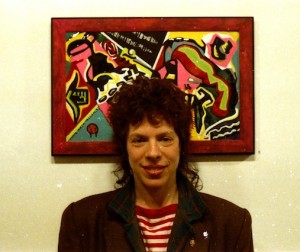 I buy beer when other purchasing behavior fails. I drink beer to slow down the ridiculous spin of this earth & defuse those who speak kindly of this spin. With too much beer – which I have learned is just about enough – I can even [seem to] reverse the spin that others put on it. But it’s like those coney Island rides  like “the Spyro Gyro or the Spinsy Winsy or the Spineroo” [chapter 40 Beer Mystic Global Pub Crawl]  – you gotta get strapped in to ride.

< Karen Garthe [1984] in her “Girl Gang” days, guarding a painting by Valerie Haller in a floating East Village gallery.

I received a wonderful Xmas present from the ever-thoughtful Nina & Paloma: a 4-month gift pak [6 selected beers accenting seasonal mood] from Amsterdam’s inimitable royal valhalla of brewskies, the Bier Koning [Beer King] with its 1200 varieties of brew. The Bier Koning opened its doors in 1985 on Amsterdam’s Paleisstraat – irony of ironies – right next to the queen’s palace on Dam Square. Ironic because it, like the praiseworthy Brouwerij ‘t IJ, arose out of the very vibrant kraak [squat] scene of the time, a scene that continues to hobble & whimper along, refusing to die. The squat scene’s legacy includes saving buildings from the wrecking ball that eventually become unmissable Amsterdam landmarks – the Paradiso, de Balie, Melkweg, Westergasfabriek, de Silo.

Beer & poetry have been intimately linked in my entrails [where digestion, gestation & rumination commingle] since my University days but, while I have never been forsaken by beer I gave up on poetry when it gave up on me. Not as good a fit as I once countenanced. I eventually stopped writing poetry altogether and turned to an even more horrible fit – reviewing spoken word recordings – and not long thereafter stopped reading poetry by and large.

That’s not totally true: I still read poetry that’s buried within the format of expository writing – sentence + sentence = paragraph. Like a book may contain the spark of revolt, the paragraph may harbor the most virile of poetry just as ready to ignite an instant of sudden awareness as any oddly-line-breaked poem. Isn’t it ironic then that in the full flower of my in-my-20s delusions about the power of the beauty of the brevity of the liberation of poetic meter & line breaks I began to experience the all-is-possible notions of poetry as particularly oppressive, an encumbrance to writing unselfconsciously & authentically. The only apt comparison I can think of is the nudity that defines nudism. 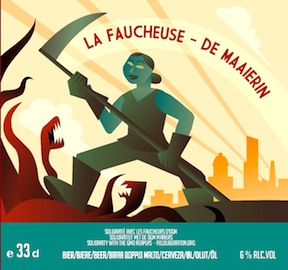 I’ve slowly worked my way back from my last serious poems dating from 1993, realizing that political pundits, op-ed, nonfiction, magazine exposés fiction, harnessed to reality as they are, all have their limitations. I have found new joy in reading poetry. What I printed out from what Google books allows of The Banjo Clock  serves as apt appetizer. “A staggering, disquieting, provocative piquance” the food writer might exclaim.

Karen Garthe & I go back too many years to a time when NYC was something totally different & we haven’t communicated for almost that many too-many years to not at least want to laugh it off … I sip the remainder of my La Faucheuse – De Maaierin bier, brewed by the Field Liberation Movement [which engages in “civil disobedience against gmo fields in Belgium”] contemplating the uneasy equation of how distance relates to knowing someone. She even makes a cameo in my recent NY Sin Phoney in Face Flat Minor.

Garthe’s Banjo Clock poems are more than mere self-described “Molotov cocktails,” more than a meal in a pill, more than words as munition – you know like armor-penetrating bullets – they are zen haiku instruction manuals of how we can view our world and all the noise and dross it wraps itself in.

Reading a poem like “Eternal Youth” with some trepidatious anticipation, I can only compare the dynamic of Banjo‘s poems to my first experience with those Magic flowers of paper you drop into water & due to “capillary action” – rapid absorption of water by paper – the wads of folded paper blossom as swollen flowers in the watery bowl.

Shards of phrases cross your mind screen like impatient lightning, like fireworks unexpectedly set off – BOOM! – “… Performs the ink of the river of truth / is stones paunch.” Like she’s tinkering with the heart using surgical tools to snip away even more of that synaptical gap of cognizance between HUH & WOW. Her  poetry assumes a new level of science that involves crunched notes & syllables leading to that instant of evanescent, satori-like revelation in “the motion of new utility.”

I reach for my Brouwerij de 7 Deugen [local Amsterdam 7 Virtues Brewery] Vuur + Gloed [Fire + Glow] beer, a wonderful dark blanket of warmth for these cold days, her words so sleek, so mischievous, so beautiful, so lethal – “a plumb line and none of the dreaming Here was their best friend” – as it heads straight for both heart & mind. Another sip of Fire + Glow, and another.

Despite our ability to manufacture flotation devices out of levity & cynicism, we eventually discover our disappointment in the cumulative daily phenomena that “stuns these sharpshooters” and we eventually and luckily come to some peace as we accept that “the quiet sinking moves on.” Brilliant! I toast another glass of 7 Virtues to lines like this – clink-clink.

I must admit that I copped and copied a number of pages from what Google allows as a glimpse into its 96 pages. But one of those 7 Virtues must include vowing to buy books like The Banjo Clock in stores like ABC or Athenaeum in Amsterdam or Village Voice in Paris or St. Mark’s Books in NYC or the Globe in Prague. & so I will take my list of summer reading and take up Karen Lillis’s challenge to save independent bookstores and buy it at St. Mark’s Bookstore or the Strand when I am in NYC in August.

& then, almost imperceptibly, bier & poesie begin to connive to remove me to a place where we may open up to lines like “whose impervious listens.”

The Banjo Clock by Karen Garthe, University of California Press, 2012.