I saw this movie (originally a three part Czech television miniseries directed by the Polish director, Agnieszka Holland, now being shown in two parts at Film Forum) on Sunday. I bought my ticket in advance, not that there was any chance of it selling out. But I have a deep affinity for films of tragedies occurring in authoritarian states. It was a beautiful day, and, as my girlfriend pointed out, I chose to spend the day in a dark movie theater.

On August 20, 1968, forces from the other Warsaw Pact states invaded Czechoslovakia to suppress the reform Communist government of Alexander Dubček, which had come to power a few months earlier, in January, 1968, after Leonid Brezhnev withdrew support from the previous First Secretary, Antonín Novotný. The invasion ended the brief “Prague Spring.” But spring is always a short season. 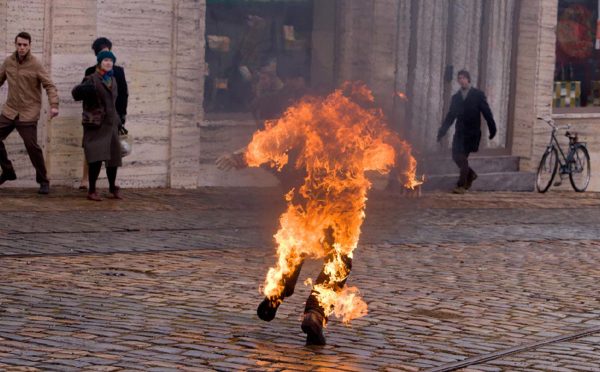 On January 16, 1969, the student Jan Palach set himself on fire in Wenceslas Square in central Prague to protest the Soviet occupation. The film follows these events and the following chain of events.

Setting yourself on fire is an extreme, shocking act. In December 2010, the same act, by a street vendor who had suffered police brutality, led to the fall of the long ruling Tunisian dictator, in a mere 18 days. In this case, that didn’t happen.

The first cop on the scene finds Palach’s letter, which states that he is part of a group who will start immolating themselves, one by one, if their demands are not met. The demands are, basically, the reversal of the Soviet crackdown. The letter gets out: the first thing a police investigator tells the cop is that he shouldn’t have opened the letter.

One thing that struck me is that everyone seemed to think that there could be such a group, that is, a group who will, one after another, by prearrangement, publicly set themselves on fire. This attests to the extremeness of the situation. All involved recognized that life under occupation might drive individuals to set themselves on fire in public. Student leaders think they can use the event; the police investigator’s superior officer fears the Russian reaction. He feels that the police must immediately find the other “human torches.” The investigator is stuck between his superior, who cares about his own job first, and his underling, who wants to move up in the chain of command.

We see the reaction of Palach’s brother, who is dumbfounded, and then grim, and Palach’s mother, who is grief-stricken, and then quietly determined. There is a funeral, a burial, a demonstration in central Prague, attended by thousands. Although there is one more self-immolation, apparently a copycat, the authorities cover this one up better. The legions of human torches never appear.

As one would expect with television, there are a lot of close ups. Fittingly. a lot of the photography is dark. The Prague we see is beautiful, but somewhat decrepit, and damp and dark. The countryside is greener and marginally more cheerful.

We see the ordinary events of life under military occupation: soldiers in a jeep, confronted by angry citizens, casually shoot off an AK-47; a passing train loaded with armored vehicles. We see people looking over their shoulders before talking with friends. (Good thing there were not as many video cameras back then as there are now in Manhattan.) We see Russian soldiers swilling vodka (Stoli, the good stuff) at the party headquarters. I thought this portrayal of boorish drunkenness was a bit gratuitous, until I remembered the depiction of the insane drinking of Czarist officers in St. Petersburg in the brilliant Brezhnev-era film of “War and Peace.”)

Several months after the immolation, a high-ranking Communist official, Vilem Novy, an older man who looks like an evil grandfather, gives a speech (at an election rally in a provincial hotel!) in which he outlines an absurd conspiracy involving “rightists” and a student leader, who supposedly duped a mentally disturbed Palach into committing the act. The mother and brother, outraged, decide to sue for libel. Amazingly, the regime allows the suit to proceed.

This really happened. And it shows the lengths to which authoritarian regimes will go to provide a pretense of legitimacy, and justice. Every nation nowadays must be a nation of laws and elections, it seems. The family finds a lawyer, Dagmar Burešová, who pursues the lawsuit, with seeming faith that justice is possible and can be pursued. One is reminded that Gandhi and Nelson Mandela started out as lawyers. (At the end of Part III, we learn that Burešová went on to become Minister of Justice in 1989, in Vaclav Havel’s government. One might ask how someone who seeks justice can become a Minister of Justice, but that’s a question for another time.)

Of course, the regime thwarts the lawsuit, through a combination of bureaucratic obstruction and veiled power. But pretenses are maintained.

Burning Bush is a fine addition to the emerging genre of movies about life under authoritarianism. Recently we’ve seen the superb The Lives of Others, The Counterfeiters, and Sophie Scholl, as well as the creditable Generation War (a German miniseries). The starting point is perhaps the two great Louis Malle films about life in France during the occupation, Lacombe, Lucien and the incomparable Au revoir les enfants, which will rip your heart out.

Holland’s career has encompassed “The Wire,” “Tremé,” “Bitter Harvest,” “Europa, Europa,” and numerous other efforts. She was a film student in Prague at the time of the Soviet invasion.

Also, it’s fitting that some praise be given to the estimable institution of Film Forum. The place means a lot. Quite simply, they show many films that would otherwise never be seen on a big screen. After an extended hiatus from movie-going to pursue other entertainments, a little over ten years ago I bought a membership. The first films I saw were Modern Times and Dr. Strangelove. This was followed by an over thirty film retrospective on Ingmar Bergman, which changed my life. I have not stopped going back.