Editor’s Note: This letter from Herbert Huncke to his Dad was first published in Peau Sensible, the print precursor to Sensitive Skin, in the summer of 1992. The issue also contained work by Joel Rose, Jack Micheline, Darius James and many more, and will soon be available as part of an anthology collecting the entire original print run.

How many times have I thought of writing to you? And how many times have I told myself — “you can’t write to your father—not now—perhaps someday if you straighten out—amount to something—at least have money—or some show of not being a failure”—then you can contact him—your people—even perhaps arrange to see him. Several times—I’ve created pictures in my mind of calling you on the phone from one of the better hotels in Chicago and of inviting you up to the rooms for a drink and then taking you to dinner—always the old Red Star Inn and of trying to give you the impression I’ve actually succeeded in some undertaking of which I need not be ashamed. Other situations, too, in which I don’t appear as I am—a wastrel, a thief, a bum, a chiseler—a petty small time character not even good in amounting to nothing. Certainly no one you want to be associated with in any respect. Oddly—I’ve always felt the least I can do is remain obscure—out of your life completely. I bring only disgrace and shame. 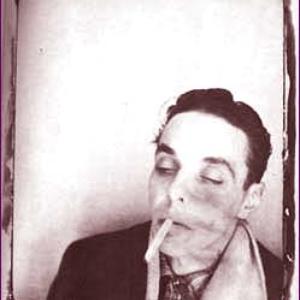 Why suddenly I want to tell you these things I can’t quite understand myself. It has nothing to do with some vague notion of reform or of a desire particularly to change my ways. I’m too completely beat for that. Nor am I seeking aid from you—although speaking quite honestly—in speculating with myself as to why I’m writing to you within the few minutes of the actual writing, the thought has flashed thru my mind—are you really trying to tap some new source for money or assistance? Truly that is not the case. There is nothing premeditated about this moment—nothing at all. Frankly, I wanted to write. I have just returned from a walk. It is one of the first spring evenings of the year and upon entering the place I’m living I felt an urge to try and justify being alive and free to feel the essence of the night and the beauty of New York and of the budding trees and shrubs and the clear bright night and all the other poetic musings which spring into play at moments like this. The idea flashed thru with write to your dad. All of which reads disgustingly corny and rather like something from a third-rate melodrama. But it is as close as I am able to come to honesty.
As I began, I said to myself—sort of what you do to write—what you find you are capable of saying? Try and speak plainly and direct. Say whatever comes into your mind to say. Also—the thought that—perhaps you might want to hear from me and that no matter how miserable a specimen I am—you in your heart feel some love for me. Then, too—I would like to hear of Bob and Marguerite.

I am not exactly a sentimentalist and I’ve knocked around enough to hardly accept the old stories of—She is your mother—He is your father—therefore blow your top—cry and weep. All quite touching but alas—I’m afraid pretty much hooey. The world—or should I say life—isn’t exactly like that—not anymore, at any rate—nor do I think we are losing a great deal in letting it pass. People are people—simply and can be regarded and valued only on their worth as individuals and (all this is my opinion—of course) not just because they happen to be parents.

Can you believe or understand me when I say I’ve regarded always—both you and Marguerite as rather amazing and certainly interesting personalities. In all honesty—I’ve thought of you always in terms of dad or father, while with Marguerite it has always been Marguerite first and mother last. I think I was always closer to Marguerite than to you and primarily because I always was and still am somewhat in awe of you. I never quite succeeded in fathoming your personality as clearly as I could Marguerite’s. Perhaps it was due to your finding it necessary to play the role of the disciplinarian more frequently than Marguerite. In fact, I can hardly recall—except when I was very young—ever being seriously chastised by her—although—I certainly can remember—scolding, and ranting and tears and general frustration no end. But it remained with you to put down the rules and laws and regulations (and they were far from unreasonable) which brought hell and highwater if disobeyed. Then, too—Marguerite and I lived rather intensely several years, in which our relationship was of necessity—more in the nature of an older woman and a young man forced thru circumstances to share each other’s existence on the basis of friendship rather than mother and son.

With you it was quite different. You remained the parent always. As a young boy—I was quite frightened of you. I felt your punishments were sometimes unjust—and, incidentally, I still regard some instances in the same light; but what I realize now and could not understand then is—you governed yourself according to what you sincerely felt to be right—always. For that I respect you.
When I became a young man—I no longer feared you. The predominant reaction was one of dislike. I thought you were cruel and unkind—deliberately. Now I realize that was not so—oh, of course, I don’t doubt what what occasionally you permitted yourself a bit of sadistic indulgence—knowingly—you must have—but altogether you were simply sticking to the rules as you felt they should be. In fact you conducted yourself in the manner which you in your heart considered to be for the welfare and in behalf of myself.

None of what I am attempting to say is in the nature of criticism. I want you to know the controlling factor in my thoughts of you and Marguerite is one of love and to a great extent admiration.

I am really very proud of you. I think you are a great man. I wish I might be half as fine as you. I always remember you as a positive person—keen and intelligent. Admired and respected as a man among your associates, looked up to by some and always with an air of good breeding and dignity.

I can also remember you rather sitting back in your desk chair, with your hands smoothing the back of your head—speaking in weary and beat tones of being licked and weighed down with responsibilities, wanting to get away from it all, worried over money and family problems. I am sure had I been in your place—I would have chucked the whole deal and cut out for distant ports—but then I would never be the one to get into a similar position in the first place.

And so it all goes—and at long last I’ve written a letter to you—not waiting until I’m worthy of doing so but just doing it anyway. Who knows—to sound real trite—but what if this is the last opportunity I’ll ever have—and somehow I want you to know—all these years I’ve loved you and thought of you as father.