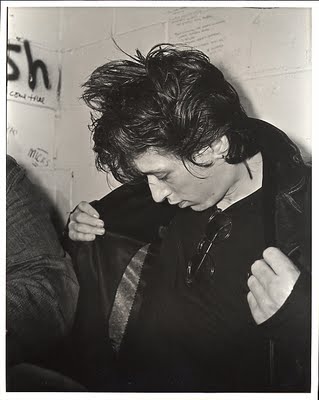 It’s 1977 and four upstate-New York high school students who have formed their town’s first punk rock band are in NYC together for the best night of their lives. They’ve been brought to NYC this particular Friday night by NICK, a somewhat older Brit manager who’s looking for a new band to Svengali.

They’ve just played a freak gig at CBGB, a smashing debut for the upstate band, and their (upstate) hit single, “Toys”.

Now they’re enjoying the after-party, an unimaginable experience for NEIL. The self-styled loser has an opportunity to run into his own icons, as peers.

He’s watching as DAN-EL works the crowd of sophisticates like the primal sophisticate he is.

CROSSFADE from “Toys” to David Bowie’s “Heroes”. Jammed party in an unfinished space. JOHNNY THUNDERS trolls through the Crowd behind another aging ROCKER fronting for him.

Anybody have any coke? Any downs?

NEIL taps STEVE on the shoulder.

They look over at JOHNNY, hitting on a deathmask punky chick with all of his street legal proto-punk glamour, hard to tell whether he’s trying to cadge drugs or sex.

NEIL sees Patricia laugh it up with a handsome poser with long black hair who looks like he’s in a band, who whispers something in her ear as two geeky fans gawk at her.

She’s not too far from Doreen, chaperoning Phil taking long hits from a joint being circulated between the lead singer of the Bent Ones and the guy he tussled with in the club.

Behind NEIL, DAN is with a few intense guys and NICK, Zipper Khan with his Walkman out and recording just like in the opening, and WHITEY, shockingly bleached like his name.

Once a band signs with a major label, it’s over, it doesn’t matter anymore. It’s just part of the machine, why waste time listening to anything that serves the corporate body, which is what happens when they cash that very first check.

Back in LA, the Screamers, with their insane genius lead singer Tomato du Plenty, they refuse to even make records. They just perform live and on these weird sick videotapes they make of their songs.

Great, and then who gets to hear the music? The chosen few?

I’m a big fan of your guitar, you know, style.

Even less acknowledgement, if possible.

(cutting off the girl cold)

“Subway Train” by the New York Dolls KICKS IN as JOHNNY leads NEIL and STEVE in, the room spacious and empty save for futons on floor and a little party around the Bent Ones guitarist, still strapped to his guitar.

NEIL pulls out a film canister half full with shake, begins to fill his pipe when JOHNNY stops him.

JOHNNY usurps the canister, pastes together three rolling papers from his pocket, breaks open a Marlboro, and empties the tobacco and all of Neil’s pot onto the papers.

NEIL watches numbly as JOHNNY rolls the spliff, sparks it up and starts toking. He motions to the Bent guitarist and takes his instrument, starts noodling a few steely chords as he walks off enjoying the spliff all by himself.

At least you can say you got Johnny Thunders high.