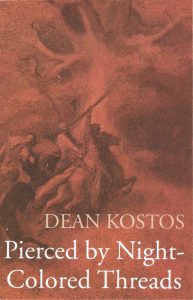 I’ve read a fair amount of poetry; I was the editor of The Evergreen Review for three years, and I’ve heard a massive amount of it while patrolling the East Village open mic bar scene, and what folks are writing and reading today seems to boil down to two general types: You’ve got your spoken word, filled with power and emotion, but not so hot on the page, and what I label ‘old school’—a gentler, kinder, more recognizable, delivery system that extends back through time.

With Dean Kostos you get the whole deal–the best of both worlds. He is simply brilliant–his knowledge extends from Keith Haring to the life of Milton H. Erickson, M.D., the Father of Modern Hypnotherapy. The poem based on Dr. Erickson, ‘A Boy Who Could See Only Purple,’ is worth quoting extensively:

When polio withered my legs,
Papa strapped me to a frame, knees bent
By splints. Halved cylinders trussed

My torso—still as a mushroom.
My eyes fluttered a fractured
Morse code. Instead of reading my lids’

Wing-beat, our doctor called it ‘seizure.’
Papa built a chair-commode, harnessed
Me to it. The Aubusson rug pulsed

With violent, violet roses. Patterns spiraled
Into a trance: waves lured me with breath’s
Vessel, past boundaries of who & where.

Dean Kostos also references The Twilight Zone, Alligator-clips, Godel, Francis Bacon, Hiroshima and the Archangel Michael. In a poem about Chaucer, he states that ‘Norman French’ was beginning ‘to infuse carnal / contours, balanced on the tip of a sword.’ He then says that the poet dives into the ‘stygian oceans of the unconscious…’ There is a five page poem cycle entitled: ‘Imagined Postcards between Alan Turing & Carl Jung,’ in which he has Turing state ‘Nothing is lost—not / unlike your oceanic unconscious, / source of endless undulations.’ Jung replies: ‘Our disciplines aren’t dissimilar.’ It ends, of course, with Alan having watched Snow White and the Seven Dwarfs. In this final letter/poem, he compares his brain to Snow White rising from her casket!

But Dean’s work is also muscular; it moves with a great gusto, and he uses rhymes the way Spoken Word devotees or rap musicians do, to speed things along. The poem ‘Honi the Circle-Drawer’ jumps from ‘sapphire’ to ‘choir’ and then ‘spires’ and ‘lyre.’ All good words; none of them cheap, none of them wasted. For sheer strength, check out these lines from ‘View from the Country of Setting Sun.’

Half of Janus: Past Face

in extinguished
sun. A hand clasps

a crown encircling
an incinerated skull.

Dean titles a number of the pieces in his book after cards from the classical tarot deck (a la T.S. Eliot) to provide an overarching structure to the entire collection. The poems using these titles are sprinkled throughout – and it becomes one of the themes that ties everything together, and finally, wraps it up – the last poem is ‘The Fool’ (which follows ‘The Sun’).

Retreating from, the world’s
savagery, the Fool leaps

from a crag-faced cliff. Floating, not
falling, he grasps

a white rose, inscribes the sky, cursive
with invisible ink.

Several other things worth noting: The cover is a wonderful Gustave Dore illustration, the book is well-designed, and the Aldous Huxley quote that graces the beginning of the book is still pertinent today. Also, the list of Dean Kostos’ credits that are listed in the back of the volume are mind blowing. He won the 2013 Benjamin Saltman Poetry Award, and he’s been published in over three hundred journals. There’s a reason why his work has found so many homes–I highly recommend Pierced by Night-Colored Threads!