an excerpt from 101 Nights

Every two weeks the exterminator came by the bar to suppress the vermin that swarmed beneath the sinks, behind the kitchen walls and in the basement. There were no rats, but the place had a fluctuating population of mice and roaches. The exterminator, known only as ‘Bill’, was a strange looking guy of about forty-five, who gave the impression that he had drunk too much bug juice. A Vietnam vet with a stare as cold as starlight, someone who had witnessed things too terrible for a civilian to comprehend. In a curious flat monotone he would regale the bar staff with rat tales, sympathetic stories of their extreme intelligence, their various moods. Rats were his obsession.

Bill had a compassion bordering on love for the elusive rodents. The cockroach was another creature whose endurance he admired, even as he killed them by the thousands. Bill described in hair-raising detail the tunnels he had cleared in Vietnam, and the moldy basements he had explored in New York, and what he had found there, including once a corpse that had been the main course of a ratty feast that had lasted for several weeks. Indeed an odor of tunnels and graveyards and freshly turned earth seemed to emanate from him. His skin was a gray color, almost the same shade as a rat’s fur. In another life he might have worked with the Piper at Hamelin. 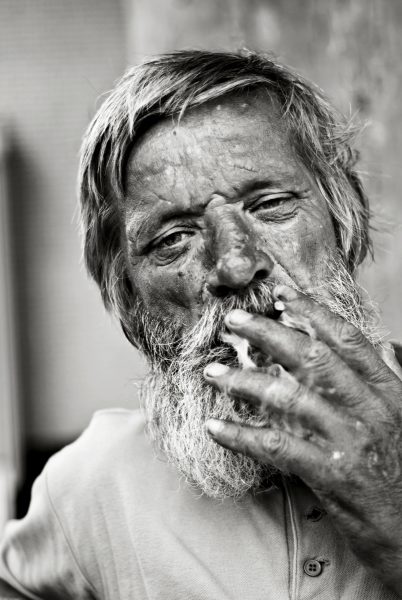 Looking at his ravaged face, I could clearly visualize Bill’s liver and sundry other internal organs rapidly corroding, like metal in sea air. After the Agent Orange he’d inhaled in the jungles of Vietnam, a little bug spray wasn’t going to make his insides worse than they already were. Before he began his work Bill always sat briefly at the bar and had a shot of Dewar’s, after which he would go about his business, methodically spraying all the infested areas, setting out poison and glue traps, while the staff got out of there into the fresh night air. Bill had met some of the self styled bohemians who congregated here, and he seemed fascinated by their lifestyle, how they seemed to live without having a real job, or any visible means of support.

Arturo was often at the bar when Bill came by, and he recognized a polluted soul similar to his own. One night Arturo drew a portrait of Bill, a lightning fast sketch in pencil on a sheet of butcher paper pulled from a table, that captured the hollow eyes, the rodent-like set of the mouth. The figure was juggling three rats, which whirled through the air as the juggler stared up at them with deep concentration. An unflattering image, but it contained his essence.

It was the last Tuesday of the month. Bill’s poison was due. In order for him to spray, the bartender and waitstaff had to cover everything in Saran wrap, take all the glasses to the kitchen. Cleanup the next day was a horrible job, and everyone tried to juggle their schedule in order to avoid it. A new bartender was working on this particular night, a man already voted by general consensus the least sincere person to have worked the bar in some time. Freddy had ambitions of owning his own joint, and in the meantime planned to learn every available angle of the business and use anyone in any way possible as he clawed his way to the top. He had been so taken with the pretty young Englishwoman draped at the bar that he totally forgot that it was bug night. Nobody reminded him since nobody liked the job and he had let the rest of the staff leave so he could be alone with the girl, who showed no signs of wanting to go home. When he should have been covering the bottles with plastic wrap he was plying her with free champagne, the real French stuff, little suspecting that he needn’t have bothered.

Vanessa Beckingsale was an artist whose current study was restaurant and nightclub employees, preferably bartenders, though she had been known to fuck waiters. She specialized in screwing them on the premises after hours, and she was working her way through Soho and preparing to map the East Village, meticulously documenting her romps with graphic written descriptions, enhanced by polaroids, bar skimmers, matchbooks from each joint. These she turned into highly evocative installations, whose pornographic content was supposedly neutralized by its gallery context, according to the pretentious babble written in her catalog. It was the new kind of participatory artwork inspired by the photographer Nan Goldin’s hugely successful documentation of the dregs of the East Village. It wasn’t very subtle, but since she was so photogenic, Vanessa’s blown up SX 70 Polaroids of herself having sex in storage rooms and booths and in this case on a barstool made a vivid impression when they were hung on the white walls of a gallery. Freddy had locked the door but Bill had a key.

When Bill walked in Vanessa was kneeling on a barstool facing the mirror behind the bar, adjusting her Polaroid while Freddy hammered away at her from behind. Bill stood there, dumbfounded at this tableau. Freddy, unaware that he was participating in an artwork, and having poured an entire bottle of good French champagne into this girl, was determined not to give her up at this crucial stage. He swung her round until she was pointing at the exterminator.

“You want some of this Bill?” he said, “She’ll blow you if you want.” Bill shuffled a few steps closer, his spray gun dangling from one hand. Vanessa was a girl who went with the flow. Accidents like this made great art. Unfazed by the malodorous roach killer, she reached out, unzipped Bill’s fly and fished out his dormant cock. Bill turned his head and looked into the mirror behind the bar, as if it might be easier to believe what he saw there than what was happening in front of him. Freddy could smell the formaldehyde coming off Bill but he just kept working, eyes closed to avoid eye contact. Vanessa put her hands on Bill’s hips to steady herself as Freddy rocked her. Bill continued to stare into the mirror as if these astounding events were taking place in another dimension. Freddy reached into the well and pulled up the Dewar’s, grabbed a glass and poured in a good shot.

“Here you go Bill, drink up, Christmas in July!”

Bill looked down at the beautiful mouth connected to his penis, then swallowed the whiskey. His facial muscles were in use for the first time in years, shaping something resembling a smile. Vanessa’s Polaroid camera lay on the bar. With her mouth full, she pushed it over to Bill, indicating he should take a picture of what was going on between his legs.

“You didn’t cover the bar yet?” Bill suddenly barked at Freddy, whose eyes were still squeezed shut as he concentrated mightily on his rhythm.

“For fuck’s sake Bill, don’t worry about it,” Freddy gasped between strokes, “you can come back tomorrow and do the spray. “